Or more accurately, Tutankhamun’s Tomb, pop-up style. It is quite amazing what can be made to pop-up, and tombs and dead kings are no exception. (Although, I suppose Tutankhamun doesn’t pop-up as such. Back from the dead, so to speak. But still.)

I was old enough to potentially be able to go and see the famous exhibition in London just over forty years ago, but it was before my time of madness and travel. A friend of mine went, though.

So he’s still mainly a name to me, Tutankhamun. Better known than others, but I’ve not had any images stuck in my mind, or any knowledge, come to that. Other than he was young.

What I hadn’t realised was that Howard Carter, who found him in 1922, had been at it since he was quite young, too. He came to Egypt as a 17-year-old, over thirty years before he met his dead king. 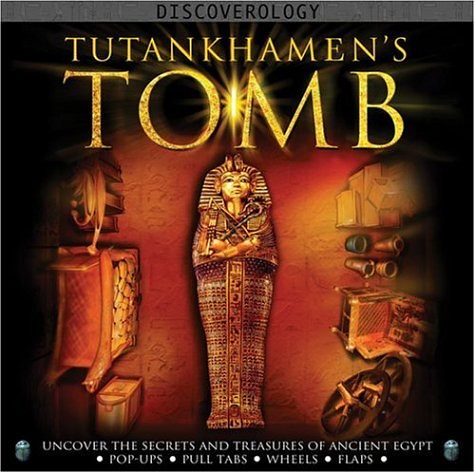 I suppose that this book is more for slightly older children than you immediately think of for a pop-up book. Not so much for fear of ruining a pyramid or anything, but more that there are a lot of historical facts, and I doubt a really young child would have much patience with either Carter or Tutankhamun. If you’re doing Egypt at school, however…

(I believe the cover photo is the US version. Hence the different spelling.)