It seemed appropriate that Joe Dunthorne – an author I know nothing about, I’m afraid – should write in ‘Made in…’ for Saturday’s Guardian Review about setting books in Santiago de Compostela, Tokyo and Oaxaca, but that it wasn’t until he went home to Swansea that he was in the right place.

I once wrote one chapter of a novel set in Los Angeles. I was maybe thirteen. Still haven’t been to LA, but if I had, I don’t believe it would help. Not even if I could write fiction.

When Adrian McKinty returned to Carrickfergus and installed his detective Duffy in the house where he, Adrian, was born, his novels got even better. Nothing wrong with New York, or Colorado, or places you arrive in via a wormhole in space, but you can’t beat your home town.

This week I’ve been reading Christoffer Carlsson’s new crime novel. I won’t review Järtecken here yet, as it’s not out in English. But watch this space.

After four crime novels set in Stockholm, where he lives now, he’s gone home. Home to Halmstad and the woods just outside this town on the west coast of Sweden. And the difference is obvious. 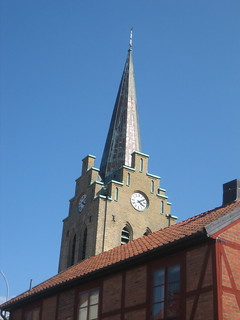 And, this has only just dawned on me, but I am home too. This is something that I’ve not been able to say about fiction in the past. I’ve never been this much home before. (There was a Henning Mankell where the detective lived near where I have also lived. That felt good. But the story was mostly set elsewhere.)

But now, I’m back in a place that I don’t share with very many friends. I think back to it, yes. Not so much reminiscing with anyone, though.

Sure, Christoffer is thirty years my junior, and he might very well have moved a bus route, lost a head prosecutor and perhaps uses slang that is too recent for the 1990s. But it’s still home.

Much as I dislike woods, I may have to traipse round to his and have a look around. And as one of the suspects says, it’s not very easy to say what you did on a specific date ten years earlier [except he can]. Christoffer has used a date for that conversation, where I can say exactly what I was doing. And so, I dare say, can most of the population of Sweden. That’s a clever way of doing things.

And it’s home. I hope there will be more.