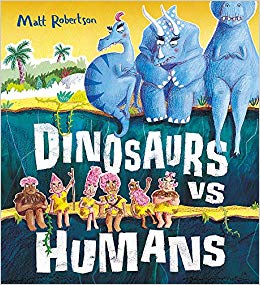 Matt Robertson’s Dinosaurs vs Humans is a sensible little story about how two very different tribes of creatures don’t like each other. They simply must fight with or not get on with the other lot. Because they are so different.

Sound familiar? We’re all like that, to some extent. Those others, who are not like us. There just has to be something wrong with them.

But as with Romeo and Juliet, at some point two beings, one from each group, will meet and become friends. And the others won’t like it.

It will take some kind of disaster to make the two sides understand they have to work together, and that they have much in common. In fact, once you’re past the first hurdle, it’s obvious the others are lovely and you have no business not getting on.

And when I realised that’s what the book was about, I was a fan. In times like these we absolutely must get on with others, even if they are blue all over, or have pink hair.