The little girl inside me had to be dragged kicking and screaming to read Joanna Nadin’s new book, White Lies, Black Dare. The witch on the outside knew it was going to be just as marvellous a book as it turned out to be, but the little scaredy cat could visualise herself at the centre of a dare at school, involving the ‘bad’ girls, and how a young and innocent new girl would end up in the middle of something awful before she knew what had happened.

But as you read, you discover that Asha (that’s the new innocent) is actively seeking out those other girls, because she wants to be one of the gang, and she’ll do anything to prove it. 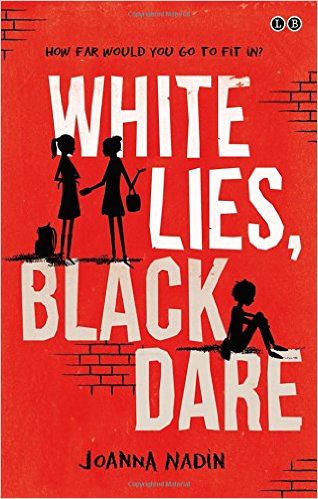 In fact, Asha does the opposite of what I would have done, in just about every situation. She doesn’t want to be friends with the safe Patience, and she has no intention of behaving well for the English teacher who sees someone like himself in her. Nor does Asha even mention that her mum is ill with cancer, or admit that she’s friends with Joe (from Joanna’s last book).

So Asha does the dares, alienating just about everyone around her, because she wants to be in with Angel (!) and her friend.

White Lies, Black Dare is tremendously well written. It’s as if the words just flow off the page as you read. And that’s despite the dares, and despite the formerly privately educated Asha strewing plenty of ‘innits’ around. And despite my fears.

This entry was posted in Authors, Books, Reading, Review and tagged Joanna Nadin. Bookmark the permalink.