This is Galaxy Quest as though it had been written by one of ‘my’ many crime writing Irish boys; Eoin, John, Declan. Except it wasn’t them, but their crazy cousin from across the water, Barry J Hutchison. Barry has been tinkering with some adult writing for a while, and he is under the impression that adding a J to his name will mean his littlest fans won’t accidentally find themselves in space with a ‘cannibal’ who swears a lot.

Space Team is very funny, and not too sweary, as there is some kind of translation system set up between the different species of aliens which not only translates but cleans up the worst four-letter words. Just as well, since that lone J is not going to fool anyone. Us fans can tell it’s Barry.

I had a lot of fun reading this. Galaxy Quest, Star Trek, Hitchhiker’s Guide to the Galaxy. Take your pick. There are bits of everything in here, and you find you don’t mind too much that Earth is no more and neither are we. Cal Carver survives, and what an ambassador for humankind he is! Teaming up with a group of criminally minded aliens, it becomes his job to save the universe. Or some such thing. 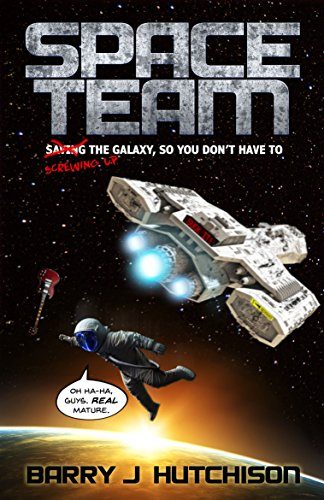 Setting off on a junky spaceship, the team have a task, at which they must succeed. Or die. The question is, do they have the right skills? Are we in safe hands? Actually, it doesn’t matter, since we are all dead. At least I think we are.

The lesson here is that it’s good to be cheerful and to try and do your best, for the team and for the universe. There are a lot of bad aliens out there. This is hardboiled space humour at its best.