Reading the prequel to the second best book of all time can be nerve-wracking. But for those of you who have also read Code Name Verity, you know why it has to be a prequel, and you will bless the opportunity to see more of Lady Julia Lindsay MacKenzie Wallace Beaufort-Stuart. Or Julie, if you don’t want to be too formal.

And you don’t, because Julie is fun and brave and outspoken, even at [barely] sixteen. The first chapter had me slightly confused while I worked on working out what kind of story this was going to be. It’s 1938 and no WWII yet, and Julie has just escaped early from school. That’s boarding school in Switzerland; not one just round the corner from her Scottish home. 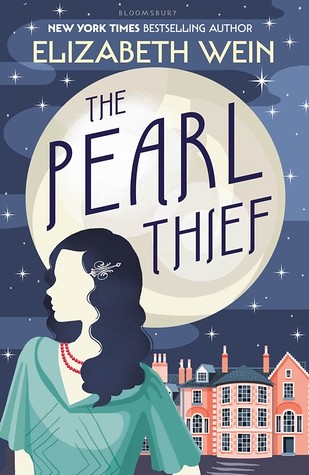 This is a romantic crime novel, featuring a girl who might have read too much Harriet Vane, and which is very much in the vein of Mary Stewart. It’s wonderful.

The danger of returning home early and unannounced is what might happen if something happens. As the title suggests, there is a pearl thief around, somewhere close to where Julie and her mother and grandmother are sorting out her late grandfather’s estate. Everyone else thinks it was the travellers. But the Stuarts know this is most unlikely, and Julie tries to find out what happened.

Her brother Jamie shows up (I love Jamie!) and there is much scope for romantic entanglements of various kinds. But who can you trust? I quite like the unreal Davie Balfour.

We learn a lot about Scottish Earls and Scottish pearls. We learn more about Julie’s mother and grandmother; both of whom we met in Code Name Verity. The international/French aspect of who they are is better explained.

Much of this adventure takes place at a thinly disguised Innerpeffray Library, making it all the more interesting for me.

And there is much kissing.

3 responses to “The Pearl Thief”