L J on her roots

When I discovered that debut author L J MacWhirter had attended the same secondary school as Offspring, I felt I had to know more. There were a few years between their appearances at this institution for education, and I don’t know about L J, but we were more than satisfied with the place. Although it has to be said that neither Offspring went in for history, either. 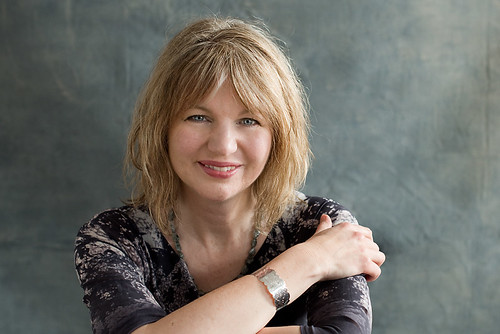 How I wish I’d known that Ruth’s home was ‘really’ Bramall Hall! Why didn’t you say? I was busy trying to imagine where she lived and what it might look like.

Heh heh. Loosely, yes. But for the plot, Ruth’s home needed to be located about a day’s horse ride from London, so I invented Crowbury Hall. Perhaps the paperback should feature a picture of Bramall Hall 😉

And while we’re in Bramhall… Can we blame your old school for your vivid imagination? Did you daydream in the classroom?

The science in your book, and the interest in space; is that something you share with Ruth and her father, and grandfather? Or was it more of a plot device?

Both. My own father was an engineer and gave me microscopes and chemistry labs for teen birthdays, although all I really wanted was a hairdryer and vinyl! He took us to museums around Manchester to see working steam trains and mill pistons from the industrial revolution, which seeped into my unconscious.

I’ve always found the weird vastness of space and time completely mind-blowing. So when I visited the Science Museum in Florence, Italy, I was struck by the 16thcentury mechanical Armillary Sphere with its old representation of ‘the heavens’ with the earth at the centre. This Sphere became an important motif in Black Snow Falling.

Ruth comes across as a fairly modern girl. Did you give her a more recent type of personality to assist with her search for the truth?

Long answer to this one! According to historians, the 16thcentury was early modern Britain, and so I made Ruth an early modern girl, influenced by progressive values. Her father was an adventurous merchant in the new ‘middling’ class – socially mobile – who had married into nobility. As her mother had long since died, Ruth had been largely left her to her own devices before the Countess came along, so she was friendlier with the household than her contemporaries.

This was the time of the late Renaissance, so Ruth was well educated and had absorbed the radical notion of individuals beginning to think for themselves, especially with a secret copy of Copernicus’ heretical book (early science) in their possession. Books were Ruth’s lifeline to the outside world, which her father inhabited. These influences made her slightly out of step with her friend, Meg, who was blue-blooded nobility. The tectonic plates of culture were shifting and Ruth, with her early modernity, is trapped in those fault lines. I set this up to expose the monstrous sexism of the time.

The Countess can force Ruth into marriage and she also tells Ruth to stop reading, as it was believed to affect a woman’s fertility. I also gave Ruth universal problems that we all share. What do you do when your understanding of someone is shattered? How do you cope when you’re betrayed – or when you have let a friend down? Ruth’s story is her journey to find agency. I confess I did make her language and thought processes sound much less Elizabethan so readers could relate to her more easily.

I know you spent many years writing this book, but it is still admirably short compared to current trends of thick trilogies, or worse. Did you have to prune a lot, or is this pretty much what you wanted your story to be?

I’m a copywriter by trade. I’m pithy all over.

And what comes next?

It remains to be seen what our pithy L J will come up with. Her hair looks fine, so I imagine the hairdryer materialised at some point. And I do hope the school library where I spent four years will buy a copy of L J’s first book. There must be some sort of proud list of what former students have got up to after they left…

One response to “L J on her roots”