I must state here that I do know Timbuktu is real. I also know where it is – roughly, anyway – on a map of Africa. It’s placing it in the right country I wouldn’t have been able to do. I’m sorry. Will try to remember it’s in Mali from now on. 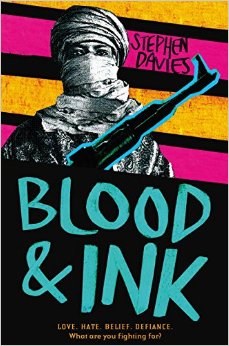 Someone who really knows his Africa is Stephen Davies. A story like Blood & Ink wouldn’t work if the author didn’t. If you disobey Stephen and read the foreword, you’ll learn that this novel is set in 2012 when there was a military coup in Mali. If you look at the news now, you’ll learn that there is recent unrest as well. I think it’s very brave of Stephen to have set his story at such a recent time with real events, including one real character.

But it works, and Blood & Ink is just as good, probably better, than even I had imagined. It could be those ninjas…

It’s about Ali who is a teenager fighting with the Defenders of Faith, invading Timbuktu. That’s where Kadija lives peacefully with her family, helping guard the town’s ancient manuscripts. She likes to sing, while Ali is there to outlaw such frivolous behaviour.

So, how can these two fall in love, and how can the author make anything like that actually work, and still look realistic? Well, I obviously won’t tell you, but rest assured this is a fascinating journey in religion and humanity, and love. Lots of humour and quite a bit of education for those of us who don’t know our Malis properly.

There is the incongruous use of mobile phones. Forbidden after the invasion, but still. You sit there reading about what seems like quite basic lives in Africa, but then you have these teenagers and their heavy use of and dependence on mobile phones. This is what makes it so real; what I suspect someone who ‘just made it up’ wouldn’t get right.

Blood & Ink offers hope, while still making it clear how difficult it is going to be to outlaw all this outlawing of normal human life. There is so much that is good in this world, in Timbuktu and elsewhere, but we need to become aware of the appalling truth of flogging, and the irrational behaviour of power-crazed people. Anywhere.

This entry was posted in Authors, Books, Reading, Review and tagged Stephen Davies. Bookmark the permalink.