‘Oh, a Mary Hoffman,’ said Daughter as she passed my stack of new books. ‘I might read that Mary Hoffman, if I may,’ said the Resident IT Consultant, and carried off Shakespeare’s Ghost. So I had to wait. 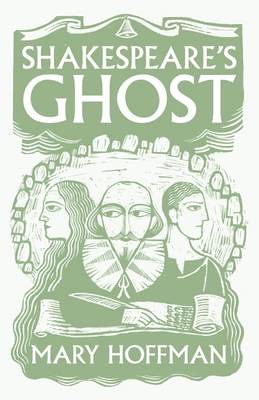 It’s not terribly strange that many authors have written something about Shakespeare right now, but I find it amusing how both Mary and Tony Bradman chose The Tempest, as it was being written, to feature in their respective books, down to having Will give their orphan boys the part of Ariel. So, two orphans, two theatre companies (well, the same, really) and two Ariels.

And still, so very different from each other. It just goes to prove what a good author can do; one idea, but more than one story.

I liked getting to know Shakespeare a bit better, and finding out what his experiences regarding faeries might have been. Mary’s orphan, Ned, meets and falls in love with a girl from that other world, and it seems that Will had come across her and her family too, when he was younger.

The trouble with Ned falling in love with someone not entirely human, apart from the obvious things, was that he also had a girl in real London that he was interested in and who was hurt as his attention wandered. At first I wanted Ned to have nothing to do with Faelinn, but after a while I felt that maybe he should, and that Charity would be all right, and after that I didn’t really know what I thought.

Just as well the story looked after those things without me. Or it might have been Mary.

There is the plague to deal with as well, and the royal family. In fact, the royals on both sides of The Boundary have trouble getting on. As does Ned and some of his rival actors who are all after the same big parts. And they depend on Shakespeare to write a new hit or two, while he finds it hard to come up with inspiring ideas.

I know this is all made up. Probably. But it is nice to get closer to historical figures like this, and getting to know them a bit. More personal.