I completely forgot the Mars bar. I’m the kind of witch who gives authors in need Mars bars. 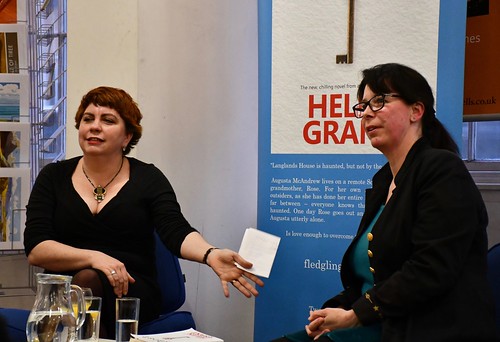 We launched Helen Grant’s Ghost last night. This was the second Edinburgh attempt, after the snow in March, and this time we were successful. Author Che Golden had mentioned the need for a Mars bar in her reverse psychology sort of invitation to the event on social media the day before. Che was chairing, so clearly felt the need to entice people to come. Online, Helen and Che have been known to call a spade a spade. And worse.

In person, Che is disappointingly polite. 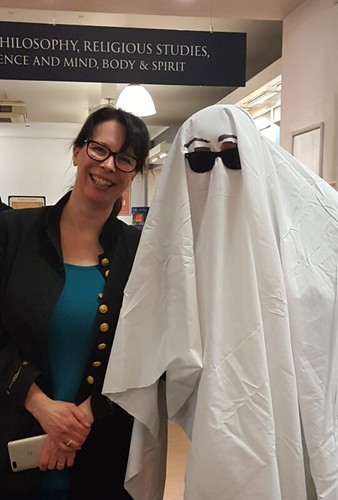 We had a full room at Blackwells, and not just because both Daughter and the Resident IT Consultant came. There were a few authors, like Alex Nye, Joan Lennon, Philip Caveney and Roy Gill. Also a Ghost, except it was just some lunatic covered in a bedsheet, who later turned out to be Kirkland Ciccone gone bananas. And some perfectly normal people.

The bananas were later visible on his shirt, which he’d teamed quite nicely with a sequinned jacket. So while everyone else was also beautifully turned out, no one was quite as bananas as Kirkie. 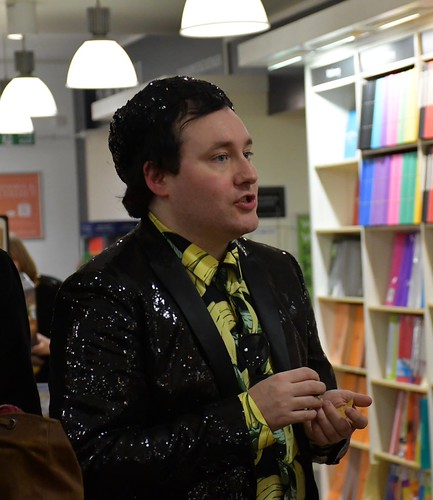 Once the silly photographs had been tweeted, Che went to work with a host of questions. Helen continued the fruit theme by mentioning The Pineapple, where you can stay for a holiday, and the deserted ruin nearby, which is one of the many places to have inspired her. 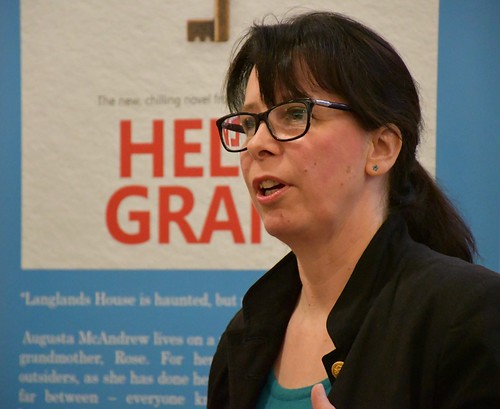 She said again how hard Ghost had been to write. The dream would be an agent who reads her new novel immediately, loves it and calls with a book auction offer of £5 million. Helen doesn’t want to write more YA, but prefers to work on traditional ghost stories.

Che reminisced about how on their first meeting Helen took her to Innerpeffray Library, and showed her the leper squint. It’s what she does for her friends, I find. 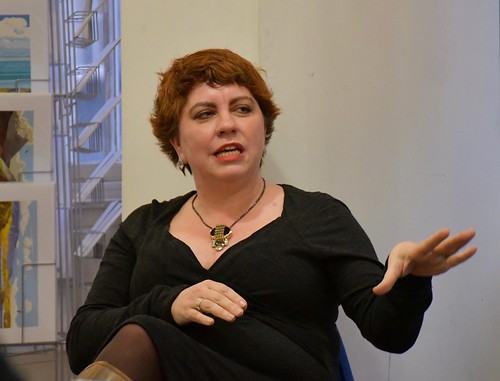 Che also pointed out that while she has read every single book Helen has written, Helen has not read any* of Che’s. This is possibly not true, but a sign of how they insult each other. I occasionally wonder if I shouldn’t have introduced them, but then, where would I learn such a varied vocabulary?

Helen sets herself an amount of words to be written every week. If she has worked hard, she might get Fridays off. That’s when she relaxes by visiting solitary places, for the atmosphere. She can recommend graveyards. 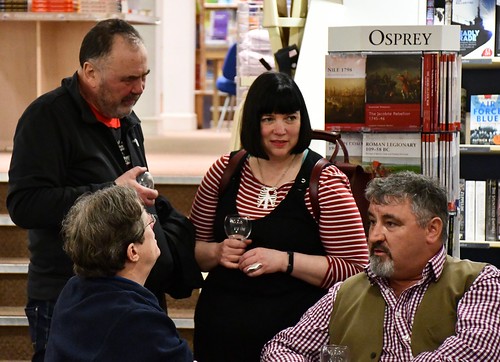 And on that cheerful note it was time to buy copies of Ghost and to mingle and chat. There was wine. 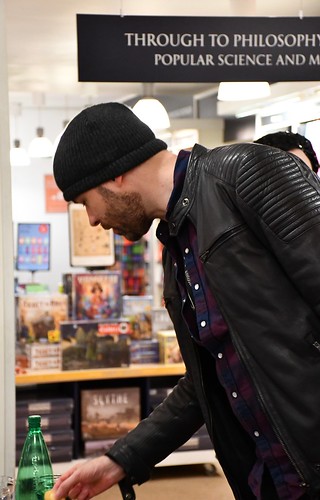 After I’d given Mr Grant a quick Swedish lesson, it was time to go home. Which, is easier said than done on a Thursday, with still no evening trains. We lured poor Kirkland to come along with us, which meant his debut on the Edinburgh trams as well as probably getting home considerably later than he’d have done under his own steam. But we meant well.

*I can recommend them.